The perfect pizza relies on the temperature and the right amount of time to cook to achieve the perfect slice of pizza. Trial and Error come into play when achieving the perfect temperature and cook time which means patience is your greatest tool. Here are some cooking temperatures and times for the most popular styles of pizza.

Since New York Style Pizza has a thin crust, the higher the temperature, the less time it needs in the oven. To achieve the perfect golden brown thin crust crunch, the appropriate time in the oven is around 15-20 minutes. Like all recipes, there is a side note until golden brown. Allrecipes have their recipe at 475 degrees and their cooking time depends on how far you stretched the dough. All ovens are different and have different heat levels compared to the standard. It is important to watch and know your oven’s heat level to determine the right temperature and the right cooking time. If using a woodfire oven, the appropriate temperature is 700-750 degrees for about 7-8 minutes or less. You want that golden-brown crust that can only be achieved by the right amount of melted butter, the perfect temperature and appropriate time for that crispy crust and the right amount of golden brown bubbly goodness of the cheese.

Chicago Style Pizza is the closest to a “pizza pie” so it requires a slightly lower temperature compared to New York Style Pizza but, a longer cooking time due to the crust being thicker with more toppings. King Arthur Baking suggests the temperature to be at 425 and cook for 30-35 minutes until the crust is golden brown. As always, be aware of the heat levels of your ovens and adjust the temperature and time accordingly until the crust is golden brown. Also, be aware of the amount of toppings on your pizza. Since Chicago Style has more toppings than New York Style, you want to pay attention to how long they are in the oven. Watch for a soggy crust, burnt crust, soggy toppings, and burnt toppings.

Neapolitan Pizza is the desired pizza to cook at a higher temperature. Most recipes say to turn up your oven to the highest temperature it can go. I suggest you be careful with that (and yes, be aware of your heat levels). My Pizza Corner turns their oven up all the way for 6-8 minutes for the perfect crisp and char that makes the perfect Neapolitan Pizza. The higher the temperature, the less you cook your pizza. This style of pizza is perfect to cook in the woodfire oven for the thin crispy crust and char. Like all Pizzas, be careful of the amount of toppings and the type of toppings especially vegetables so they don’t burn and make your pizza soggy.

Food Network recommends 450 degrees F for 20 minutes, rotate in the oven for another 15 minutes until the crust is spongy and golden brown and if you are doing the cheese alongside around the crust, until cheese browns and crisps. Always dust the pan with cornmeal and drizzle olive oil for the extra crispy flavorful crust too for assistance with the texture of the pizza. Also, be aware of your pizza oven heat levels. You are looking for a golden brown, spongey, crispy crust, and brown crispy cheese (optional).

Similar to Sicilian Pizza, Pan Pizza needs to be proofed and will rise in the oven. However, since a crispy buttery crust is essential and it’s baked on a cast-iron pan, the temperature is higher, cooking time is less, and it’s best to bake on the bottom rack of the oven. Ree Drummond suggests to pre-heat the cast iron in the oven while you are preparing the dough and shaping the pizza. Since the pan is preheated, the cooking time is less because the dough will be set in the preheated pan and already “seasoned.” The spongey, crispy, brown, buttery crust is essential when making pan pizza and its important to pay attention to the process to achieve the perfect bite and taste.

Natasha Kravchuk in her step-by-step video of her recipe for California Style Pizza recommends tomatoes, red onion, mushrooms, and black olives for their desired level of moisture and the flavor that results when they are cooked properly. She also adds deli ham for the extra smoky flavor but, that is an optional ingredient. The key is properly cooked toppings while achieving a crispy crust.

Many of these cooking temperatures and times came from researching recipes and trial and error with my own pizza oven. As long as you know that the crust has to be crispy, and golden brown in texture, you’ll have the perfect bite of pizza. 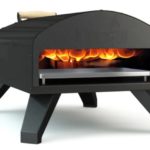 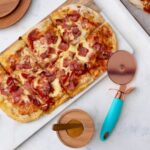 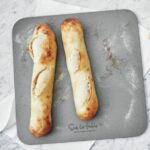